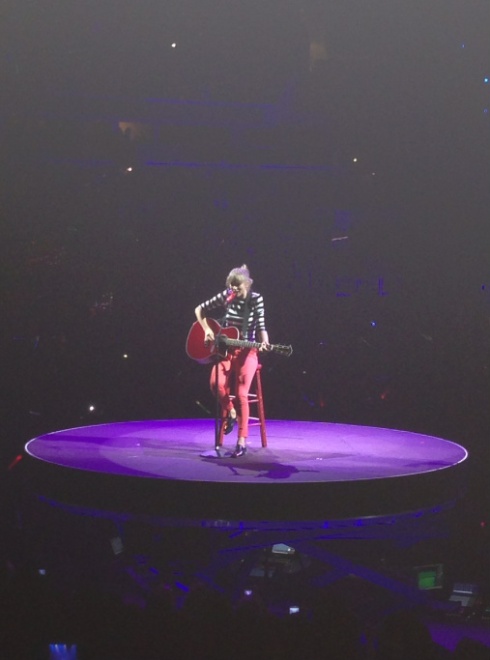 My favorite thing about concerts has to be the sense of unity between everybody. I love the way complete strangers start conversing together and how everyone knows every line to every song. I love the way everyone just lets loose for one night.

Way back in December my sister stayed attached to her computer for two hours in order to secure three tickets to Taylor Swifts’s Red Tour. After five months I had nearly forgotten about the concert

until the week of when my mother mentioned our tickets had come in the mail. Anyway if you hadn’t guessed my sister, her friend and I all went to a Taylor Swift concert this past weekend. In order to get to the concert venue we had to take the lightrail. The tram was packed full of people all buzzing about the concert and trying to guess what songs she would sing and what costumes she would wear. After fifteen stops we finally reached our destination and  were greeted with an overwhelming amount of people dressed in Taylor Swift memorabilia. After fighting through the crowd we enter the concert venue and immediately I lost my sister in the crowd. Alone and without my phone I nearly started hyperventilating. However my sister managed to find me quickly and for the rest of the concert she forced me to hold her hand.  To say the least I was mortified. Here I am, nearly fifteen years old and I still need my sister to hold my hand. Despite the embarrassment and the fact that a bottle of water and some fries cost fifteen dollars the rest of the concert was amazing. Ed Sheeran who was the opening act was absolutely

brilliant. And Taylor’s performance was terrific. She performed every song from her latest album as well as some of her older songs. My favorite part was when she got off stage and ran through the crowd to perform on a smaller stage that was literally only three feet away from our seats. Even better Ed Sheeran joined her on the smaller stage and together they sang their song Everything Has Changed. It was one of those perfect nights that I’ll remember  for years to come and I think it was a fanatastic way to start the summer.

May the summer be ever in your favor,

(First post for Summer 2013! I’m a little rusty with this whole blogging thing, but I’m sure I’ll get into the swing of things after a few posts.  Anyway just wanted to say thanks to everyone who reads my posts and follows my blog. You guys are the best!)